Our time in Cape Breton is drawing to a close. The last 3 days I fished (I missed one day) I had a hard time raising a fish, but so did most everybody else on the river. There's been no rain, the river is low and warming up, the tides are not as high, and the fish don't seem to care about moving. It's hard to get a fish that isn't feeding anyway to strike at a fly that doesn't look like any food source on the face of the Earth. I was , however able to get a couple to rise to a dry fly, a spun deer hair number called a bomber -white with orange palmered hackle and white calf tail wing and tail. I would cast across and let it swing down and wake. It looked like it might be an effective presentation for smallmouth, too. The water did get clear enough for me to watch some 2-3 foot fish hang out in the pools. Nice to become familiar with your adversary. One afternoon I was watching 4 or 5 nice looking fish on the edge of the Tidal Pool, when a 3ft salmon jumped completely out of the water, then from different part of the pool another did the same. One of the fish I was watching moved and rolled and I thought "Alright! now is my chance!". I fired off some casts, trying to drop the fly just in front of them. Then I saw a beaver come swimming up the river. Dang.

I don't think fly fishing for salmon is for everybody. Bass fishers who might feel gypped if they don't have 30 fish days wouldn't last too long on this river. But there is an allure to it. Casting thru a pool becomes like a mantra, with the chance that on the next swing, one of those silvery beasts will hook up, fight like hell, and then give itself up to someone who's as unskillful a fisherman as I am. 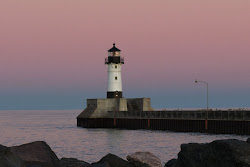 Links You Can Use 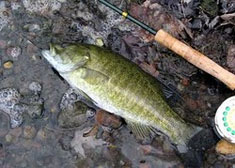 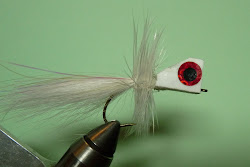